Taken over a desolate area of the Sahara Desert, the striking colours of the sand dunes and sandstone formations are the only features in a landscape that don’t hold a drop of water. END_OF_DOCUMENT_TOKEN_TO_BE_REPLACED

Astrologer Laura Walker of OracleReport.com has written another eye-opening astrological report that delves into the geo-political (and much more) event of 9/11/01  and has shown us now that the 15 year anniversary which is upon is, is highly significant.

TIME BANDITS: DECONSTRUCTING THE RE-TRAUMATIZATION OF THE 15th ANNIVERSARY OF 9/11

The 15th Anniversary of the terror attacks and trauma response of 9/11 is upon us, offering the degrading globalist monstrosity a chance for a life line if they can reproduce fear.

The Illuminati minions of the Archons use astrology to time false flag operations for the maximum impact of any goal.  On September 11, 2016, certain astrological aspects at the time of September 11, 2001, reactivate.  This offers the Illuminati an opportunity to attempt to capitalize on the energetic imprints of the past, and thus reassert control.

Many of the Illuminati refuse to accept that the old ways no longer work, and thus are highly tempted by a repeat in the “archetypal field of consciousness” that astrology describes (decodes).

The highest levels of the cabal use astrology and knowledge of the cycles of time to time their moves against humanity.  In this way, they have been Time Bandits, manipulating psyches through the induction of trauma — fear.

A system in collapse would try to reassert control using the same old methods, attempting to revive the past.  This indicates a deep level of denial.

This weekend, on the 15th Anniversary of 9-11, certain planets are re-activating the astrology from the day of the attacks:

END_OF_DOCUMENT_TOKEN_TO_BE_REPLACED Harmony is agreement, peace, friendship – the polyphony of infinite frequencies. Waves of light and energy vibrating constantly and endlessly, resonating deeply through – and as – All That Is.

Scientists and mystics unite in this truth.

The cutting edge in physics states that all matter consist of tiny vibrating strings of energy. Some physicists also claim that everything consists of an intelligent field of consciousness. Energy has a frequency and a wavelength – vibration is everywhere. Only a small part of all this energy is within the spectrum that we can sense through seeing and hearing.

We are still connected to everything and we receive and send out infinite amounts of frequencies all the time. We interact through so much more than just sight and hearing. END_OF_DOCUMENT_TOKEN_TO_BE_REPLACED Meditation is a simple and proven path to improve mental and physical health. Its effects have been seen for thousands of years and have been tested and proven in modern times.

There are many ways to meditate – you can always find one that suits you. It can be as easy as taking 2 to 5 seconds where you disengage from thoughts and clear your head; it can be coloring, running or mindful breathing. Find a way that resonates with you. If you are of the anxious sort you should definitely consider meditation, as it is the best long term solution to stress and anxiety.

Research has shown that eight weeks ofmeditating less than 30 minutes a day can decrease perceived anxiety and stress. MR images show a link between perceived stress-reduction and a decrease in gray-matter density in a part of the brain called the amygdala. [1] Meditation changes your brain structure! END_OF_DOCUMENT_TOKEN_TO_BE_REPLACED 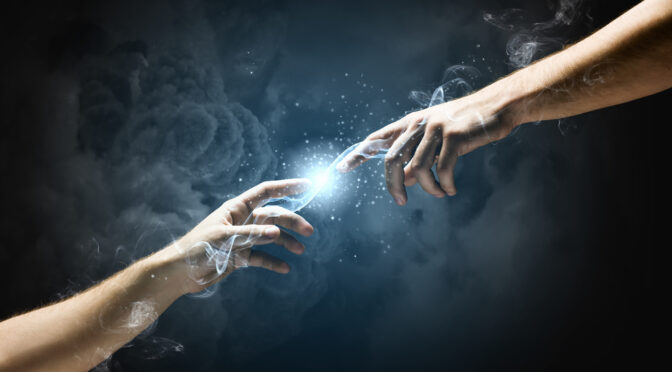 One of the most brilliant scientists Michio Kaku has decided to dive into a world that many of his peers haven’t. He is using physics and string theory to help prove the existence of a mathematical creator.

In his most recent work, Michio Kaku has found that we live in a mathematical world or “matrix”. Professor Kaku uses what is known as tachyons or theoretical particles to make sense of the universal matter and bring it all down a simple unified theory.

“The goal of physics, we believe, is to find an equation… Which will allow us to unify all of the forces of nature, and allow us to read the mind of God…” -Michio Kaku While searching for an understanding of the mind of God, Professor Kaku believes that there is an intelligent mind much more advanced that we can fathom on the 11th dimension that is actually creating everything we see.

This isn’t the work of random forces he says. END_OF_DOCUMENT_TOKEN_TO_BE_REPLACED They have some incredibly advanced biotechnology on them especially when you think about their sophisticated chameleonic skin color changing response, camera-like eyes, and extremely flexible bodies. Considering these are all invertebrates, they have a very large nervous systems as well. END_OF_DOCUMENT_TOKEN_TO_BE_REPLACED