Pixar Studios has recently come out with a new short cartoon, which was featured at the beginning of the good dinosaur last year. It was directed by their new Animation director “Sanjay Patel”. This short, Sanjay’s Super Team, is a personal story of growth and awareness in a child’s eye, and the relationship between a boy and his father. 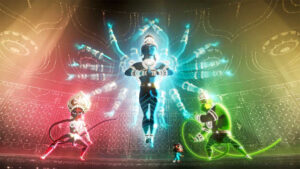 When the demon is destroyed, he doesn’t blow up… He calms down, completely surrenders and relaxes into peaceful serenity, and dissolves through the void, and into a new reality.

That’s a pretty powerful lesson for a young boy!