In 1992, at an Earth Summit at Rio de Janeiro, Fidel Castro, the leader of Cuba, gave an extraordinary speech on ecological preservation entitled Tomorrow Will Be Too Late. Near the conclusion of the said speech, Castro stated that we have to pay our ecological debt, more so than foreign debt. True to his word, in 1996, the Cuban Ministry of Fishing declared a 150 km stretch of archipelago off the Southern coast of Cuba as a protected area, which meant that no activities were to take place there that would have the potential to distress the ecological system of the region.

Almost 20 years on, Jardines de la Reina (Gardens of the Queen), is one of the most preserved coral reef region in the Caribbean, if not the world. Going underwater is like going back in a time, you are transported to an ocean floor that would have existed about 100 to 150 years ago, not tampered by our technological progress.

Despite the protected status, one of the main contributing factors for the Jardines de la Reina’s immaculate state is Cuba’s economic isolation through much of the last century. Driven by an austere dictator and governed through Communism, Cuba was left to stand on its own after Soviet Union’s fall. In any other country, the system would have collapsed but in Cuba the people were more resilient.

They resorted to homegrown solutions to much of the technological advancements they were deprived of. The same holds true for farming as well. Unable to import pesticides or fertilizers, the Cuban government launched campaign after campaign to encourage local farmers to adopt greener methods. The government’s effort bore fruit and the Cuban farming sector went through an organic farming revolution through much of the 1980s and 1990s.

The employing of green farming techniques had a two-fold effect. First it prevented synthetic fertilizers and pesticides from leaching into the ocean and wreaking havoc on the biodiversity there. Secondly, it helped the local mangrove population to thrive. Mangroves share a symbiotic relationship with many fishes who use them as breeding grounds. A healthy number of fishes mean that the corals are flourishing as well. This in turn results in an abundant mangrove population because coral reefs act as the first line of defense against belligerent waves that have the potential to erode away the fine sediment mangroves grow out of.

Additionally, Cuba’s homegrown crop of marine biologists take immense pride in preserving the Jardines de la Reina. They often spent days in the area researching the ecological dynamics of the region, tag and track the two main predators of these waters, Grouper Goliaths and Caribbean Sharks, and also employ various esoteric techniques that have developed out of Cuba’s lack of streamlined scientific contact with the outside world.

The effect of strict environmental protection here can be gauged from the resilience of the corals. For instance, when the surface water temperature reaches a certain threshold, coral bleaching occurs. In coral bleaching, the algae that cover the corals and are its primary source of food and protection, leave under stressful conditions like high temperatures and pollution. As a result, the coral is left exposed to the elements, loses much of its nutrition and turns extremely pale or white. Coral in this form is very susceptible to diseases and most varieties dies within relatively short timespans. For example, the rare Elkhorn coral can barely survive a few days under such conditions.

Therefore, in 2005 when surface temperatures in the Caribbean reached a 125 year high, most of the coral population in the region was decimated. To add to intense temperatures, the region recorded unprecedented hurricane activity. Consequently, in many places 90% of the corals vanished. This means that since 1970, the Caribbean has lost nearly 50% of its coral cover, including a whopping 95% of the remarkable Elkhorn coral. However, Cuba is a different story. Here the corals have had extraordinarily efficient recovery from bleaching events. This can be attributed to the pristine marine conditions there.

However, the Jardines de la Reina is under threat. Its remarkable preservation is in part due to its relative isolation. With the potential lifting of the international embargoes imposed on Cuba, this region could see an economic boom due to skyrocketing numbers of aquatic tourism. As much as this would help the Cuban economy, it could have a potentially detrimental effect on the region’s biodiversity and ecological balance. A chief contributor to these negative impact would be Cuba’s neighbor, the United States. 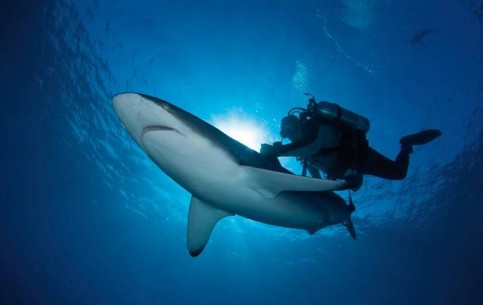 Barack Obama’s administration have initiated a thaw in the Cuba-U.S. relations, after decades of cold animosity between the two nations. This has resulted in increased freedom for U.S. citizens to travel to Cuba after the relaxation of travel restrictions. Now, many would come to enjoy the excellent scenery of the country, both above water and under. This could really harm the natural order of things. As Washington-based, marine scientist and president of the conservatory organization, Ocean Doctor, stated in an interview to Public Radio International:

“We’ve all seen the track record of the United States: we tend to mess things up that we love, and there are a lot of different interests now with their eyes on Cuba. So one of our projects is working with the Cubans on developing good decision tools for the future — and that includes environmental economics; helping the Cubans put a price on their natural ecosystems and to look at alternatives, like sustainable eco-tourism.”

In conclusion, without a shred of doubt, the Jardines de la Reina is a sparkling jewel in the crown of marine conservation. It is a natural laboratory of sorts that could help researchers preserve embattled coral populations across the Earth. However, it remains to be seen how the immaculate nature of the region could be affected by increased human footprint. As of now, it is just like that you have stepped into an alternate reality where the humans understand and reverse their ecological impact on the Earth’s environment.